Luxurious Showers to Inspire Your Next Bathroom Remodel

Bathtubs have become the poster child of bathroom luxury. One of the go-to ideas of unwinding after a long day is soaking in a tub – perhaps one with water jets, a bath bomb of choice, and candles on the side. However, few people know that with the right design and fixtures, showers can be upgraded to create an equally luxurious experience. Don’t believe us? Then check out our list of unbelievably sophisticated showers and you can decide for yourself. You can also save bits and pieces of these cool shower ideas for your next bathroom remodel.

Here you will find ideas for both indoor and outdoor showers. Let’s get started! 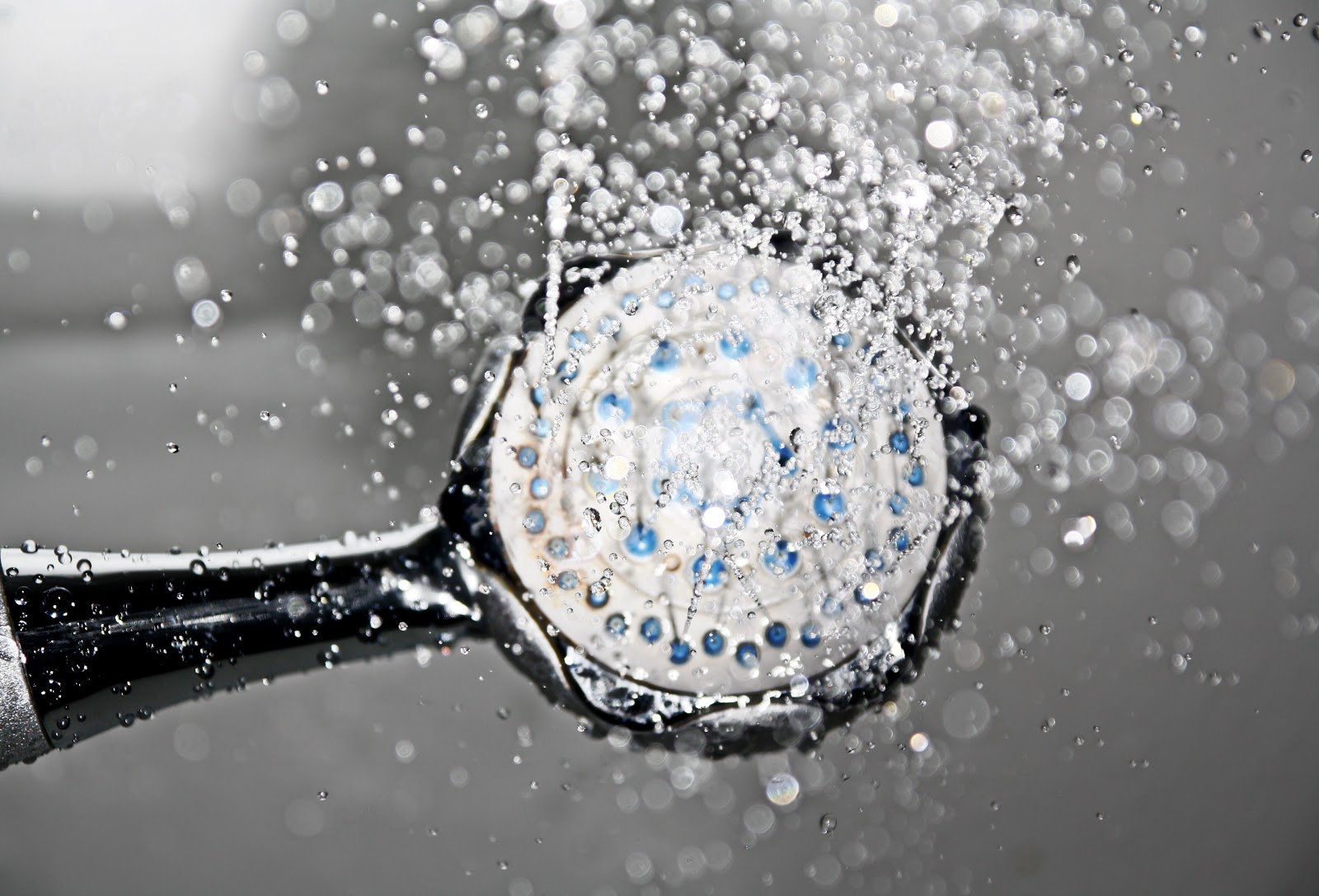 Glass Blocks for a Refined Look 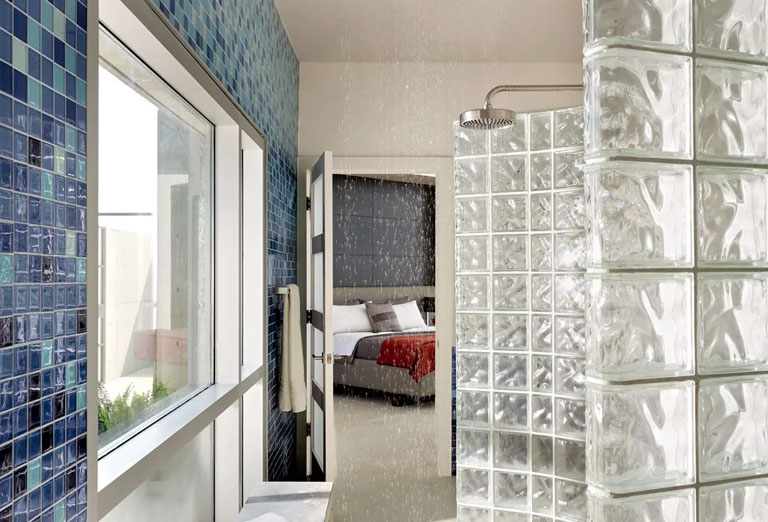 Glass blocks are commonly placed into walls to let in some sunlight. But this wetroom in a Nova Scotia home features a neo-angular shower wall that almost resembles a wall of clear ice. The edges are left open so you can easily walk in and a bench is placed by the glass window for easy relaxation. You even get the option of using the fixed shower head or the concealed shower above.

Notice how this shower just flows seamlessly from the bedroom, making it a truly inviting space. The sunlit ambiance is perfect for energizing during the day and as night falls, you’ll be able to look out into the dark night sky in a cleansing experience within this pristinely designed shower.

A Warm and Sophisticated Alpine Shower 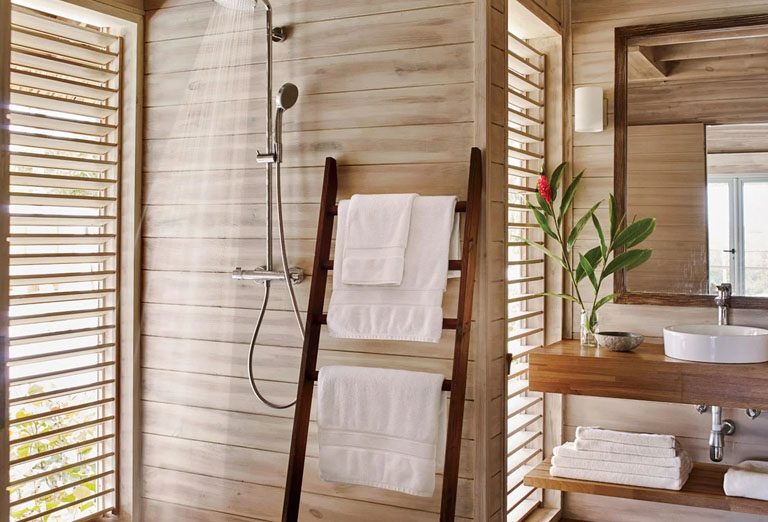 Nothing spells nostalgia quite like alpine cabins. With some design and plumbing magic, you can have this nostalgia and warmth with each and every shower. This guest bath found in a Dominican Republic home features a wetroom sheathed in American pine.

You have the option of using the fixed showerhead or the handheld shower. The sun peeps through it’s concealed windows, filling the space with brightness but offering a sense of privacy too. A ladder is placed just beside the shower and serves as a towel rack – a simple yet clever touch. 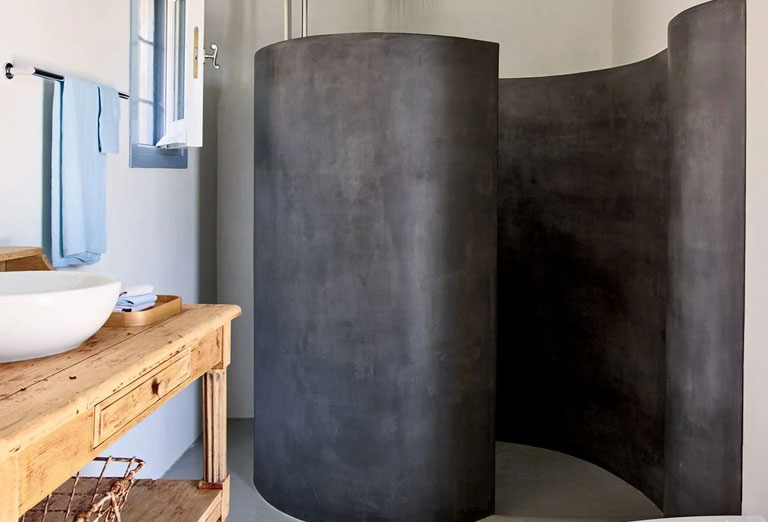 Wouldn’t you just want to leave the cares of the outside world and take a relaxing shower retreat? This unique shower enclosure found in a Greek home features a unique twist – literally. You go into the short spiral wall made of waterproof Moroccan plaster and enjoy a soothing experience in this covered safe space.

Let’s face it. Exposed showers just aren’t everyone’s cup of tea. But there’s also the dilemma of having an opaque enclosure that might minimize the bathroom space. With this unique design though, it’s organic and unobtrusive even if it’s opaque. Top this off with an exposed rain shower and you’re all set. Elegant, beautiful, and just plain natural – without trying. Anybody else thought of the Fibonacci sequence after seeing this? 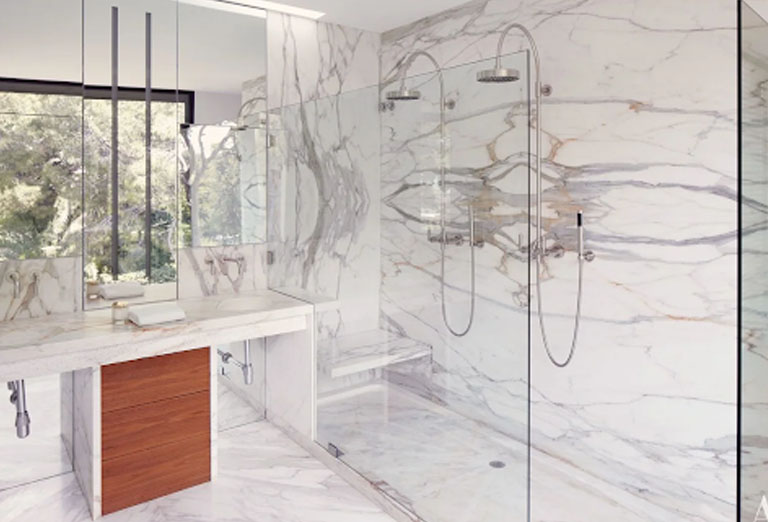 Marble has long been associated with class and grandeur. This corner shower in a bathroom found in a Spanish home has the floors, walls, and counters covered in marble to achieve an extra level of sophistication. The walnut drawers provide a warm touch to keep things in balance. Having twin exposed rain showers makes this an elegant shower for two. 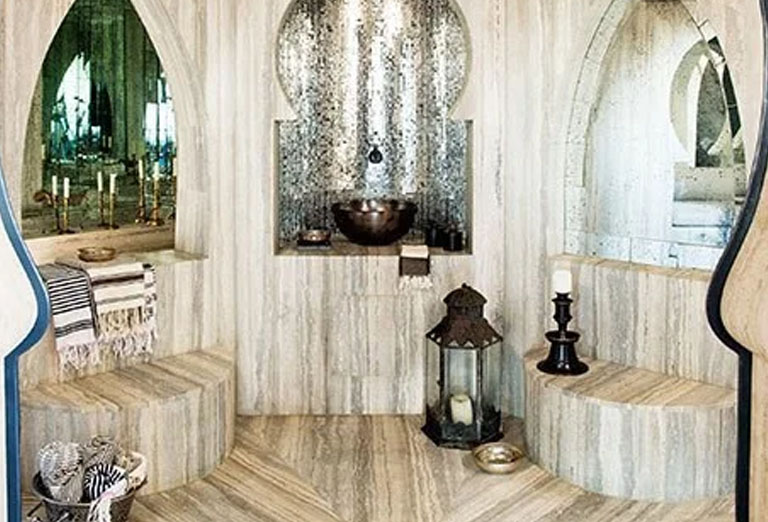 They say that cleanliness is next to godliness. Unsurprisingly, this temple-esque shower with its arched windows and Middle Eastern decor can give anyone a sense of cleansing and relaxation that is beyond physical. This wetroom is sheathed in Turkish marble with fixed semi-circle benches on two sides. The exposed bronze rain shower works perfectly with other metallic decors, as it brings water straight from above to wash away the cares and worries of the day and make room for tranquillity.

A Sunlit Circle of Cleansing 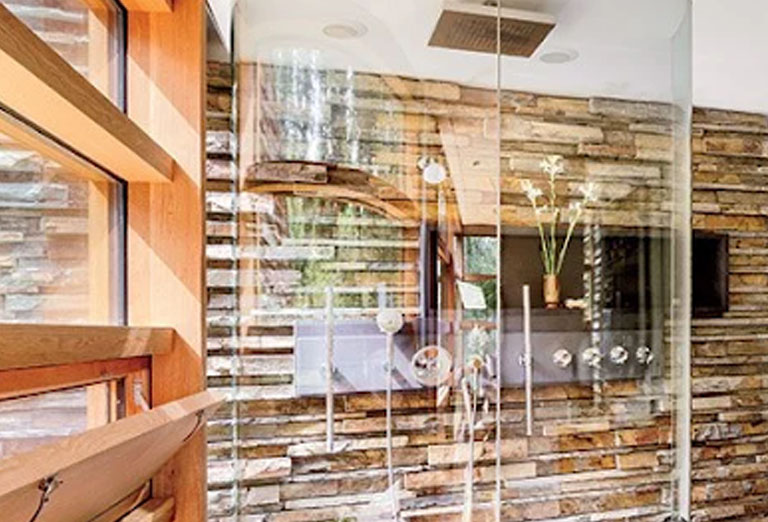 Earlier, we talked about how exposed showers are not for everyone – yet some of us just want to be bathed in glorious sunlight as we shower. Well, here is a shower for those who want the best of both worlds. This walk-in, curved, glass shower is situated right next to jalousie windows where sunlight can come in and splash the room with brightness. The wooden panels on the windows are at an angle, obstructing the view into the bathroom, and could also be closed for total privacy. The wall of red brick behind the shower gives an extra sense of warmth to this sunlit (but private) escape. 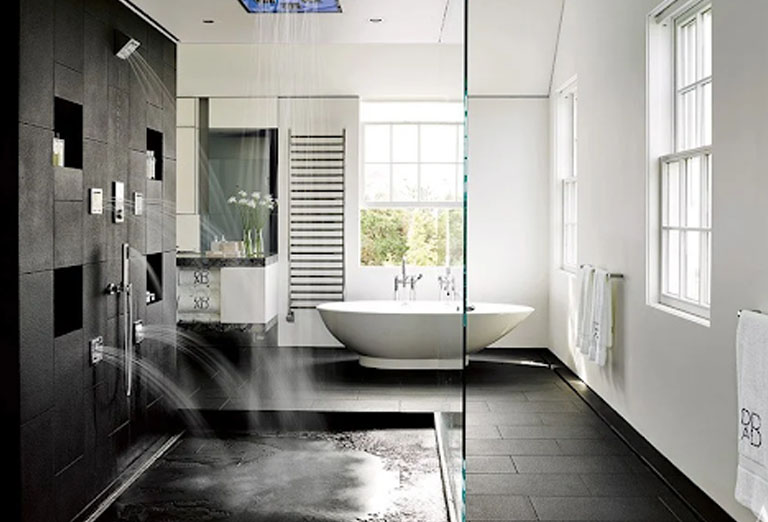 Modern, subtle, and masculine. This beautiful wetroom, built in a Nantucket home, features a fixed shower head above, four body jets along the wall, and a concealed shower from above. Safe to say, this kind of layout is great for anyone who likes to switch up the shower experience every now and then. The recessed square shelves also provide a sharp and clutter-free look to this stylish shower.

A Shower Pouring From up Above 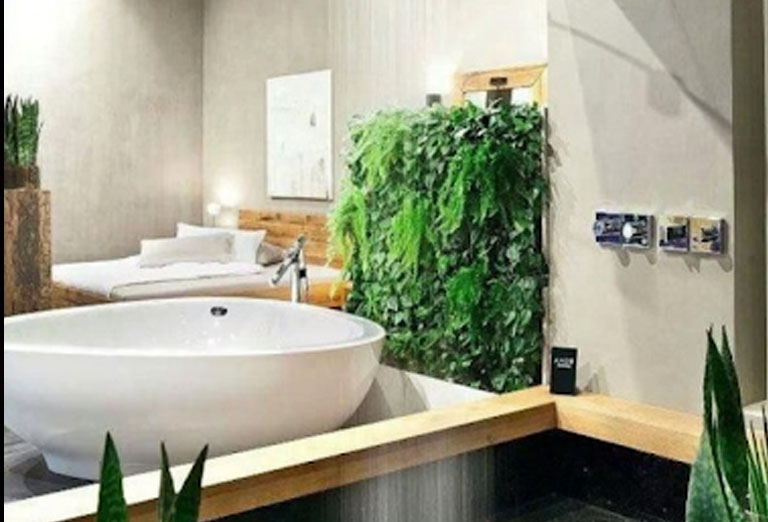 Have you ever wanted to add a natural flair to your bathroom design without entirely giving up the comforting, home-like vibe? This walk-in shower located in Costa Rica achieves the perfect balance. The concealed shower from above and the absence of a shower screen makes you feel like you are showering in the rain or a really small waterfall. Plants on the wall and around the bathroom add to the effect.

A Shower That Comes Alive With Colour 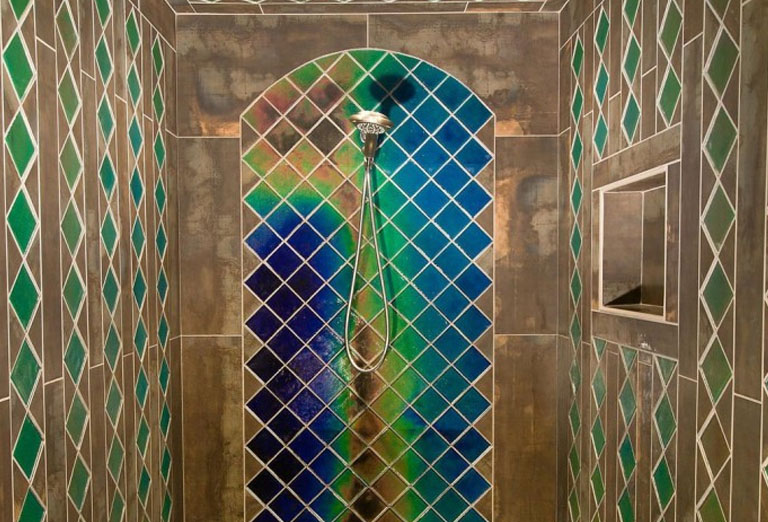 Stay in the Mickey Mouse Penthouse at the Disneyland Hotel and you’ll find one of the most magical showers in the world. This amazing shower is lined with tiles that react to the heat of the water, flashing a brilliant display of red, orange, yellow, blue, and green. Apart from these fancy tiles, everything else is pretty standard. You’ll find a handheld showerhead and recessed shelves in the wall that add a streamlined look. 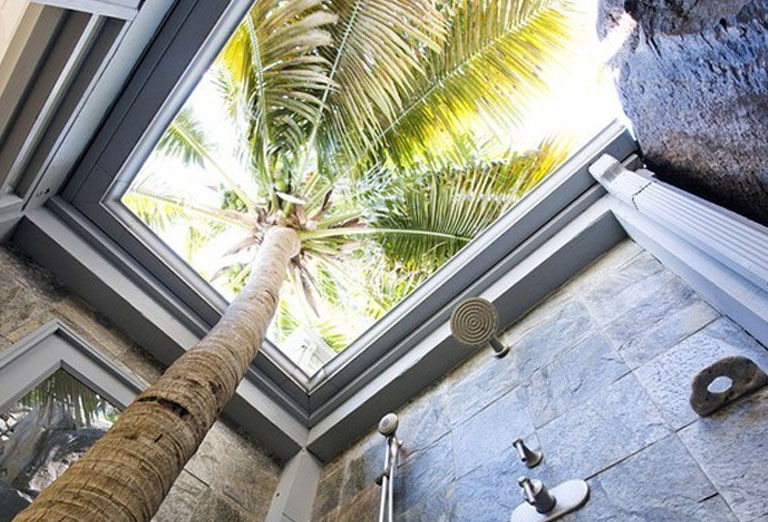 Nothing spells “outdoor shower” quite like showering beside a tree. This outdoor shower in Tortola has a palm tree that grows right beside the shower, providing a beautiful natural touch and shade from the sun. The shower is walled around, giving plenty of privacy. You can use either the fixed showerhead or the handheld shower as you gaze up, take in the fresh air, and watch the palm leaves swaying against the sunlight. The natural stone tiles give an added outdoor feel to this tropical shower escape. 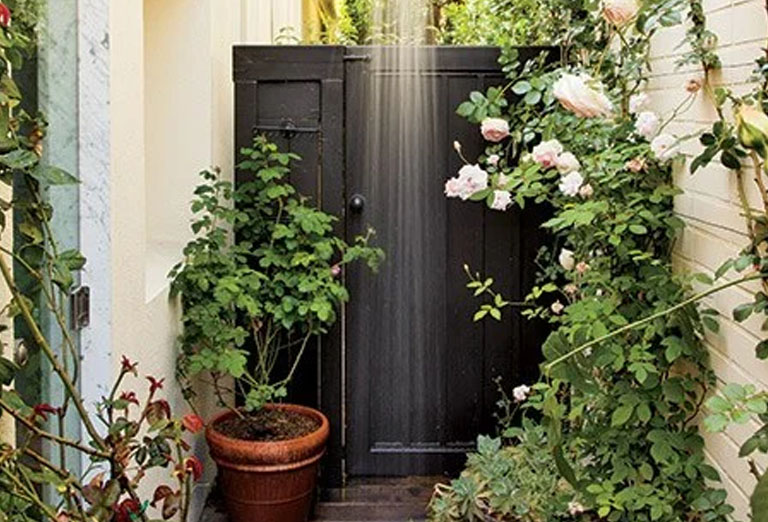 Showering in a rose garden is a dreamy and romantic experience. This outdoor shower in Los Angeles has blooming roses and other beautiful plants surrounding the exposed rain shower fixed to a wooden beam above. It is private and enclosed, so you can literally take the time to smell the roses as you shower.

A Shower Lost Amidst Trees 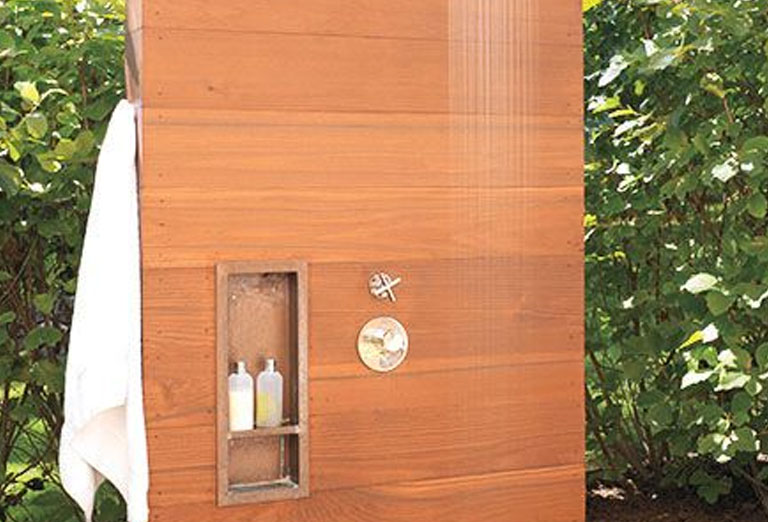 If you have ever taken an inconvenient camp shower during a camping trip, it might have crossed your mind how nice (and whimsical) it would be if the shower from home would just magically appear. The scenery around you is beautiful – if only the shower experience was just as nice Well, this shower in an upstate New York home is just that – a shower amidst trees. The shower wall is made of clear cedar with a recessed shelf to hold shower gel, shampoo, and etc. 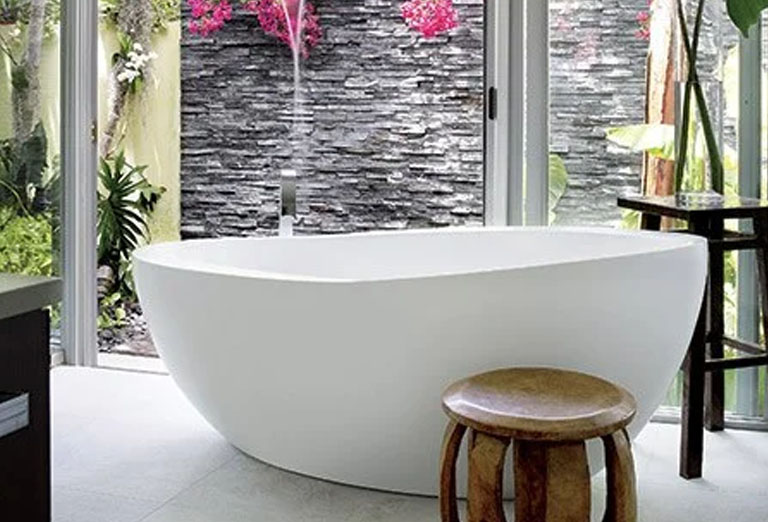 This slate-walled waterfall outdoor shower in a Florida home looks like it came out of a dream. Just imagine that distinct waterfall sensation while you’re surrounded by plants and flowers under a clear sky. And should you ever want to switch over to the bathtub, it’s only a few steps away thanks to the convenient layout of this dream-like outdoor shower.

A Shower in the Open Air 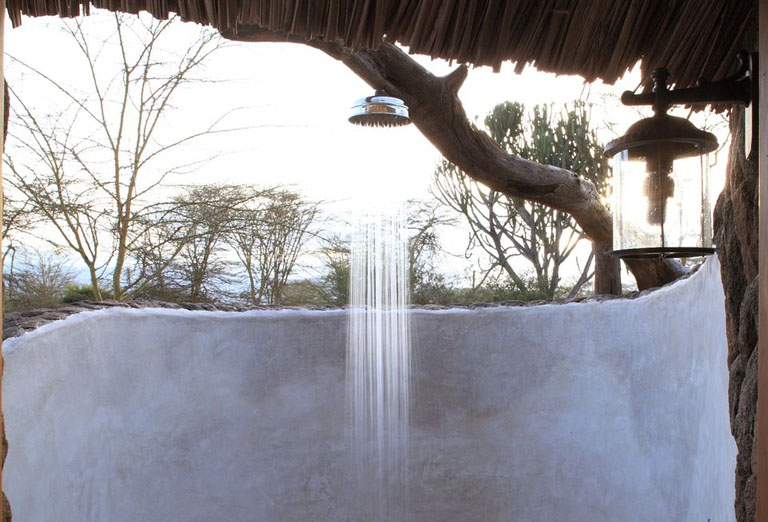 In quite a few of the examples here, we’ve seen how outdoor showers can be private too – given that it has strategically placed walls just like in this open-air shower. You can look up to see an open sky while showering under an exposed rain shower. The bench lining the walls is a perfect place to sit and relax so you can enjoy the scenery of sky and branches above for as long as you like.

Luxury showers are all well and good but nothing will ever compare to the one found in that special place called home. Hopefully, you can mix and match these cool shower ideas and dream of your very own luxury shower. Once you have your vision for a perfect personalized luxury shower, all you need to do is team up with the right plumbing remodelling service to make it into a reality.